Flex Lewis is moving on to bigger things.

James “Flex” Lewis has dominated the 212 scene for years with six straight victories at the Olympia. He has proven himself to be the premiere 212 athlete with his size, shape, and definition. So news of his retirement came as a major shock to the bodybuilding community.

Just days ago it was reported that Flex Lewis would be stepping away from the stage. But it appears that what the reigning 212 Olympia champion meant was that he would no longer compete in the 212 division.

According to Flex Lewis’ coach Neil Hill, the 212 powerhouse appears to have his sights on a new division to conquer in bodybuilding. That’s right, Flex Lewis is moving up to the Open Weight division to battle against monsters like Phil Heath, Big Ramy, and William Bonac. Neil Hill details the plans in the post below.

So 2018 will be @flex_lewis last year competing as a 212lb Athlete. He’s defended that tile from day one where he became the first ever 212lb @mrolympiallc . He’s endlessly travelled the world competing in different 212lb shows, and he’s also travelled the world relentlessly giving back to All the Fans, Athletes, Promotors and sport as a whole. Yes this will be his last 212lb outing come September in Las Vegas, but he WILL be back at some point as a New reformed Open class bodybuilder at some point. maybe 2020, but when ever it maybe you will see a new level of quality size and muscle that will allow him to finally be competitive in the open class division. Evolustion is what life is about…

Are you excited to see Flex Lewis take the challenge and compete in the Open Weight division? 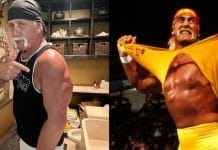