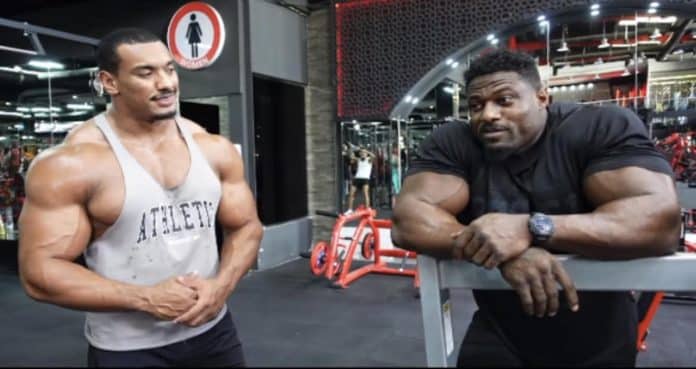 Andrew Jacked and Larry Wheels have teamed up many times in the past and have now once again.

Jacked is one of the up-and-coming talents in bodybuilding. He earned his Pro Card this year winning the 2022 Arnold Classic Amateur. He followed that up with a victory at the 2022 Texas Pro and will now have a chance to compete at the Olympia.

Wheels recently began focusing on his health as he was hit hard by the news of the deaths in bodybuilding. He began gettin checked by doctors because of his use of PEDs. Wheels continues to lift heavy in the gym and use different supplements to keep his physique at an elite level. The duo got together in Dubai for a massive shoulder and bicep workout.

READ MORE: Andrew Jacked Credits Larry Wheels For Pushing Him To Limits: ‘Larry Has Played A Big Factor In My Life’

This workout is mainly shoulder day and it begins with cable lateral raises. The lift is performed with lighter weights as the duo begins to warmup the muscles. The second warmup of the workout are chest-supported dumbbell lateral raises. Andrew Jacked and Larry Wheels begin to up the weight a bit here.

Jacked and Wheels perform the first sets with two dumbbells but move onto just one in the final superset. This is when they hold one weight with two hands to perform the movement.

Wheels is one of the top powerlifters in the game right now and has been watching his health this year. He recently got off steroids and began using other supplements. He explains that he feels good now that he is not on a full cycle.

“On a full-blown cycle on blast, within the first exercise, I’m already pumped,” Wheels said.

After two warmups, Andrew Jacked and Larry Wheels take on heavier weights. This superset is one that hits the delts, chest, traps, and triceps. There is a way to focus on multiple parts of the body during a superset. That is what the duo is able to accomplish here.

During the workout, Jacked shares that he believes in training calves multiple times a week. This is important when bringing the full package to the bodybuilding stage.

“I do calves before my workout. That was the discipline I gave myself everyday,” Jacked said.

The workout concludes with biceps, cable curls and cable hammer curls. Jacked is preparing for his first appearance in the Olympia and explains how he prefers cable machines for better control. He also explains the breakdown of his diet just 17 weeks out.

“I don’t measure my Neals but when I diet, I get results. You know your body well. You know foods you should and shouldn’t eat. You should eat until you’re content and satisfied,” Jacked said.