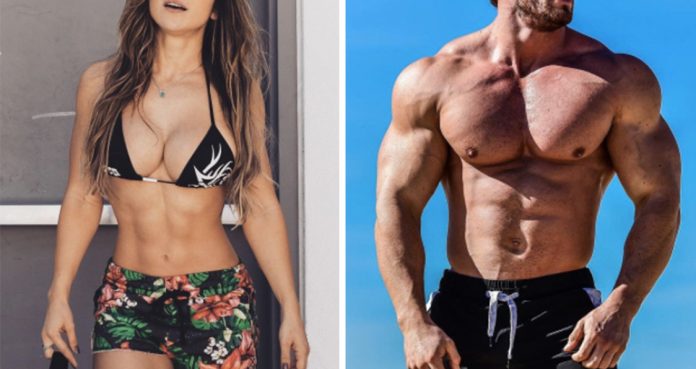 Disclaimer: The opinions in this article do not represent the opinions of Generation Iron.

Best Physiques In The World

A well-crafted physique can be aesthetically appealing and a symbol of godly strength. This is one the reasons people don’t mind sweating in the gym. Building a shredded physique takes a lot of hard work, patience, and persistence, and only a few people have what it takes.

Following athletes living the fit life can push you to take your first step towards working out. If you’ve already been working out, these athletes can help you in staying on track and motivating you so you never give up. These are the 10 best physiques in the world –

At Golds gym tryin a new exercise- "the crossfit curl" ?, only can be done with kettle bells lol??. @fatgripz pump

You just can’t hate this guy. Steve is one of the most humble people in the fitness industry. He treats his fans as family and shares everything with them. Follow him on his social handles to stay motivated.

Killing the #FlashBackFriday & #FlexFriday in a single post….. – Hope you guys are starting or ending a great Friday, where ever in the world you are!!! #flexlewis #Olympia212 #DreamBig

Flex Lewis is a former 7x 212 Mr. Olympia and has undoubtedly one of the best physiques in the world. Only a few other people can beat Flex when it comes to muscle symmetry. He’s now taking his physique to the Men’s Open division (though unfortunately no longer competing in 2020). We can’t wait to see this fantastic physique maxed out without a weight limit.

So damn back in black??

Michelle is one of the most famous fitness celebrity. She has graced numerous magazine covers and shows no signs of stopping. Her persistence and hard work in the gym can push you to work on crafting your physique.

It's Monday and you better be ready to kick the world's ass!!!! As you can see I'm a bit serious in this pic but why the hell not as there's a time for play and a time for being serious as hell!!!!!!! Go get your success people and do not allow anything or anyone distract your focus on being the best version of YOURSELF!!!!! I tell myself everyday that I am NOT here to be an average Phil Heath period!!!! I hope you all start your week off with some positivity, creating some incredible momentum for pure excellence! Now let's goto work! Who's with me? #PhilHeath #MrOlympia #Philknows #HardWork #Dedication #Faith #NeverQuit #EmbraceTheStruggles #BelieveInYourself #DoWork #JustGotScaredOfMyOwnDamnPic ????

Phil Heath is a 7x Mr. Olympia for a reason. He is considered to be one of the best bodybuilders in the world. For years, when he stepped on stage it is was an instant game over for his competition. After being dethroned in 2018, he is making a comeback at this year’s Mr. Olympia to reclaim his thrown and join Ronnie Coleman and Lee Haney as a world record Sandow trophy holder.

Bali dress code ?? thank you @kunjavillas for an incredible time here at this outstanding resort!

Courtney is the reigning Ms. Bikini Olympia. She is also one of the bubbliest characters you can follow on social media. Don’t fall prey to her pretty face, her workouts are some of the most grueling ones. No wonder she has such a shredded physique.

One of my main focuses when I started lifting in my mid teens, was #symmetry – I really wanted to ensure my physique looked balanced and proportional. Whilst certain muscle groups may respond faster than others, the key has been to know when that is happening and focus more on the weaker points. This often means halting some of my favorite exercises/routines, in favor of more unique, specific exercises to help bring up parts which I feel are lagging. I'll be covering much more of this throughout the months on YouTube and my IG stories, but for now – I encourage all of you to take a cold hard stare at your own physiques, and identify which areas you feel you really need to bring up for a more balanced & complete physique. I'll do my best to cover as many 'solutions' as possible. ?? #physique #fitnessmodel #abs #lean #fitspiration #bodyfat #traininggoals #gymlife

Rob Riches might arguably be the most shredded guy on this list. He maintains his peeled look throughout the year. If you’re looking for training tips and hacks, Rob is your guy. He also has some of the best collab videos with other fitness athletes.

Greece you will be missed. Thank you for a sick holiday ?? ?? #catchyalater

Calum is the modern-age Arnold. We won’t blame you if you confuse him with the Governator. His monstrous muscle mass and vascularity will leave you in awe. If you’re a fan of the classic physiques, Calum Von Moger won’t disappoint you.

Some days you do incredibly big things and conquer the world…. Other days you're really proud of yourself for cooking dinner without setting off the fire alarm…. today was one of those days ?? In the comment section (PASTE) what you last (COPIED) 1,2,3 goooo?? – photo @jasegraphics l hair/makeup @naomimua

Paige is challenging the idea that women should not have big muscles. Not only is she ripped, but can take your breath away in any outfit. Follow her on Instagram and she will keep you hooked and wanting for more.

Ulisses Jr. is a muscle monstrous. His Cobra back and shredded abs will give you some serious goals. While he is shredded to the bone, Ulisses is one strong individual. Try out some of his exercises the next time you’re in the gym and you’ll be sore for weeks.

Alice Matos is a fitness athlete and an entrepreneur. This Brazilian beauty has her own line of apparel called Labellamafia. Alice is a must follow if you dig girls who speak a foreign language.